The result of the 11th Quality Management Level Research in 2022 conducted by the Union of Japanese Scientists and Engineers (JUSE) and sponsored by Nikkei Inc. was announced in December 2022.

We are quite pleased that GC CORPORATION was awarded the highest ranking - 5 stars. Until the last time the result was announced in rank order and GC was ranked 2nd in 2018. From 2022 it was changed to rating and 5 stars were given to 4 companies; GC, Suntory Holdings Limited., Ricoh Company, Ltd. and CARECOM CO., LTD. Our group company GC DENTAL PRODUCTS CORP. was also rated 3 stars.

The research rating is based on the analysis of six major categories:

GC was highly recognized for its efforts in Cultivation of Human Resources for Realization of Quality Management and Capability to Deploy a System Horizontally. 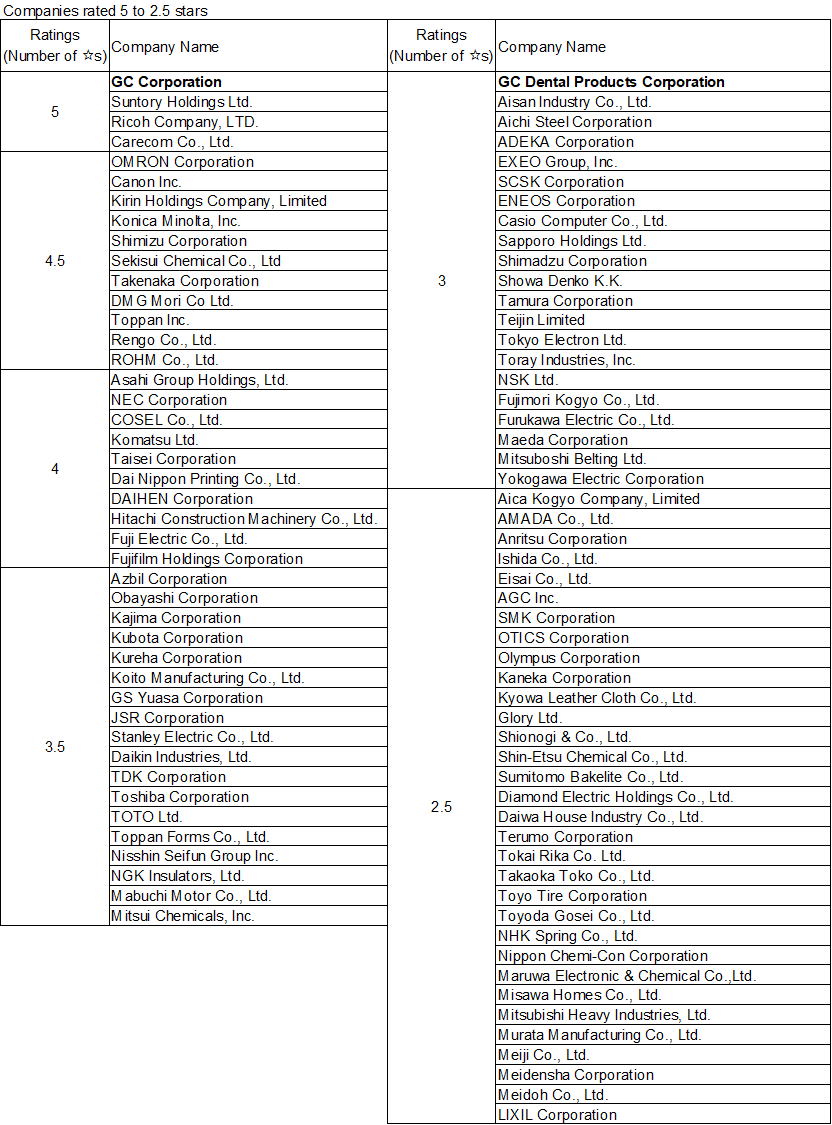 GC received the “Deming Application Prize” (current Deming Prize) in 2000, and the “Japan Quality Medal” (current Deming Grand Prize), the highest honor of Japan’s TQM, in 2004.  Furthermore, within GC Group, GC Dental Products Corporation received the “Deming Application Prize” in 2003, GC Dental (Suzhou) Co., Ltd. received the “Deming Application Prize” in 2010, and GC America Inc. received the Deming Prize in 2014. For the recognition by the European Foundation for Quality Management (EFQM), GC Europe was selected as one of the finalists of the Excellence Award in 2013, won the “Prize in Leading with Vision, Inspiration and Integrity” in 2016 and became the Global Excellence Award winner in 2019.  Chief Corporate Advisor Makoto Nakao received the Deming Prize for Individuals in 2012 for spearheading GC Group’s efforts for promotion of TQM and building it into a global company over thirty years. Furthermore, he received the “Marcos E.J. Bertin Quality in Governance Medal” from the International Academy for Quality (IAQ) in 2016. In 2021, his writing "Growth strategy by overseas expansion and quality management - 100 years trajectory of global middle-sized enterprise" received "Nikkei QC Literature Prize".

Through continuous promotion of GC’s Quality Management (GQM), GC would like to step up company-wide efforts for quality management and fulfill customer expectations.

Your continued support would be much appreciated.